China is big and diverse

China is the world’s most populous country with a population of 1.44 billion people. It has quickly become the second largest economy in the word. And, it is the world’s third biggest country by territory.

China is not only big but it has broad geographical and cultural diversity. To understand China, it means paying attention to China’s diversity, to its distinctive geographical regions, historic patterns, economic activities and resources. Key regions of China include: the North China Plain, the Loess Plateau, the Southeast Coast and Shanghai, the Yangzi Valley, the Sichuan Basin, Southwest Uplands, Xinjiang, Northeast (Manchuria), Qinghai and the Tibetan Plateau. Traditionally, China has recognized the distinctiveness of geographical regions, and some cities, such as Shanghai, Beijing, Tianjin, Chongqing, and Hong Kong, have special political and economic roles.

The majority of people speak some variety of Mandarin Chinese as their first language, but there are several hundred languages in China. As the means of tying the country and its regions together, a common written language, Standard Chinese is learned at school.

Political organization in China has an important role in creating common culture and tying the country and its regions together. The Communist Party of China is the country’s sole political party in power, which is the first stipulation in the Constitution. The National People’s Congress is the highest organ of state power. Local people’s congresses are local organs of state power.

Because of its scale and many layers, it can be hard to understand China’s administrative system. In brief, the country is first divided into provinces, autonomous regions and municipalities directly under the Central Government. Provinces and autonomous regions are divided into autonomous prefectures, counties, autonomous counties, and cities. Finally, counties and autonomous counties are divided into townships, nationality townships, and towns. Administrative organs established at these different levels provide a variety of service, resource allocation as well as regulatory and control tasks.

China’s economy has grown fast throughout the past forty decades, and China has become the world’s second biggest economy. The high growth based on resource-intensive manufacturing and exports is reaching its limits, and China is restructuring its economy from low-end manufacturing to higher-end manufacturing and services, and from investment to consumption. Nevertheless, massive investment in infrastructure continues, as proofed by the ‘Belt and Road Initiative’, the global infrastructure development strategy extending to almost 70 countries. It was adopted by the Chinese government in 2013 to build a China-centred global trading network.

China is fostering new drivers of growth in many areas, such as, AI and smart cities, manufacturing IoT, biotech and advanced materials. For foreign companies, one of the key reasons for operating in China today is the country’s rapid technological development. In particular, the size and dynamism of new Internet companies, and the fact that more than 900 million people have access to Internet in China, make the country a significant new engine for digital economy.

The number of initiatives linked to long-term ambitious climate targets (including reducing the country’s reliance on coal and raising the share of non-fossil fuel consumption), combined with innovative measures where the public, the private and the civil society resources are all utilized, suggest a vast number and variety of new business opportunities in China. 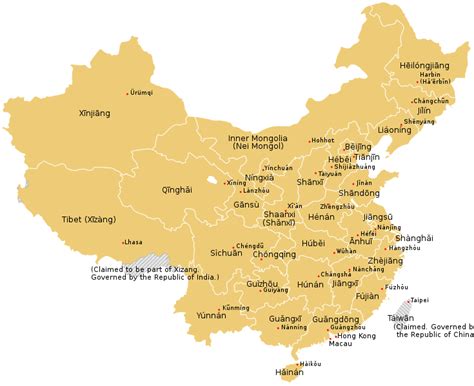 More facts and statistics about China:

Understanding the geography of China
Languages of China

News from China in English: